During our stay València gave us 4 sunny days with the ideal temperature to be able to turn it far and wide. And we took advantage of this to be led to discover the city.

First part of the tour in the Ciutat Vella

First we refueled by stopping at the historic and beautiful Horchateria Santa Catalina to enjoy a snack that can only be found here in València: the horchata de chufas with fartons, a sort of long and soft sandwiches covered with icing or powdered sugar.

They are eaten by soaking them in the fresh drink prepared with chufa, the tuber of the yellow nutsedge plant, introduced in Spain by the Arabs that is grown only in this area.

Loaded and “softened” by this greedy stop, in company of Marcos Buigues of Liber Tours, very well prepared and so passionate about his work, we started a tour full of notions and emotions, starting from Palazzo Borgia.

Currently home to the Cortes Valencianas, it was built by the Borgias in the 15th century in the Gothic-Renaissance style. And so we learn that the noble Borja family, Italianized in Borgia, that of the popes Alfonso, who became Callisto III and Rodrigo, then Alexander VI, was originally from a village called Borja, from which the house took its name.

In front of the austere palace there is the church to which the Valencians are most fond, that of the Virgen de los Desamparados (the Virgin of the Abandoned) or as affectionately it is called La Geperudeta, the hump, for the position of the head, which looks downward. The interior of the church with its oval dome, with the wonderful frescoes by Antonio Palomino, is rich and precious but the gaze is completely captured by the highly venerated statue.

We listened to Marcos, who told us why the venerated patroness of the city of València has this inclination of the head that makes her look like a hump. It seems that the statue was first placed lying down but it was decided to place it on its feet for better admiration. This is the “technical” explanation, but there are several popular legends, the most supported of which is that the face tilted downwards is a gesture of motherly listening and welcoming.

The second “discovery” concerns the “Tribunal de las Aguas”, the Tribunal of Waters, the oldest in Europe among those still vested with judicial action, for this declared a cultural heritage of humanity by Unesco.

The task of the structure is to defend the rights of the peasants and its eight judges, representatives of the 8 canals that bring water to the territory of Valencia, are well known for the speed with which they solve the problems: sitting in a circle on armchairs wood and leather dating back to the seventeenth century, gather in the Cathedral’s Door of the Apostles every Thursday at 12 o’clock, the rite takes place in Valencian and the sentences relating to the distribution of the Turia water are final. 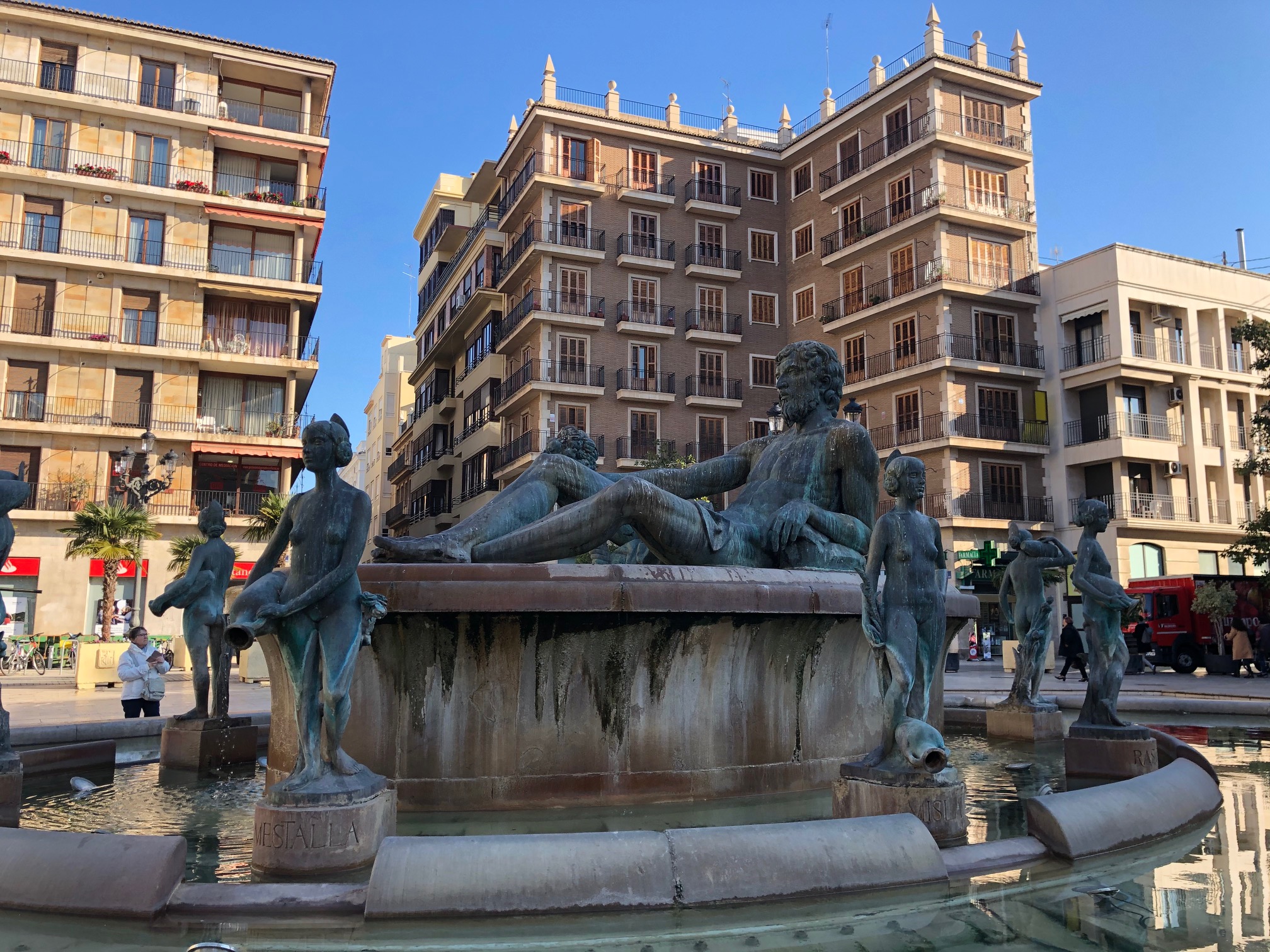 The importance of the river and canals is further highlighted by the fact that the fountain in the center of the square, the Fuente del Turia, reproduces the Turia and the eight irrigation canals.
Unfortunately even if it is Thursday we cannot attend the meeting of the Tribunal de la Aguas because we have to complete the visit of the Ciutat Vella, the old city. 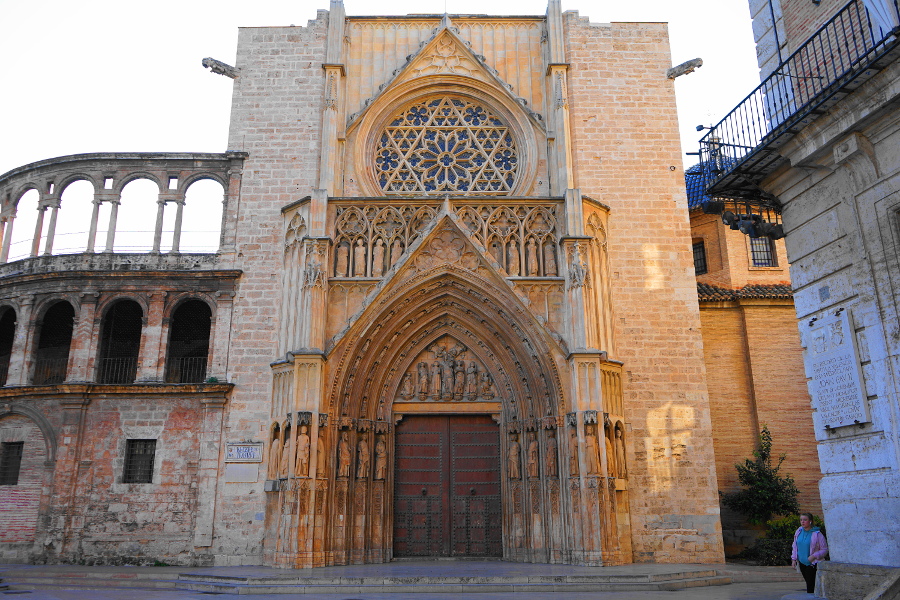 The Gothic-style door, on which the Apostles and the figures of the Virgin and Child stand out, is one of the three access routes to the Cathedral whose visit begins from the outside admiring portals and domes, covered with blue majolica typical of València, city ​​famous for its ceramic production since the fifteenth century with various decorative objects and tiles that are very reminiscent of the Portuguese azulejos. Which in miniature format we brought home as a souvenir in the form of a magnet to be applied on the fridge.

Returning to the Cathedral, the oldest portal is that of the Almoina, overlooking the Archbishop’s Palace. In Romanesque style it is surmounted by the faces of fourteen people: they are the spouses of the noblest families in the city who joined in marriage to repopulate the city after the expulsion of the Moors followed by the Christian Reconquista by James I.

The church is entered through the Portal called “de los Hierros” (of the “Irons” of the gate) which stands out on the grandiose concave facade in Baroque style.

It overlooks the Plaza de la Reina which today looks very different from that of the past since the buildings in front have been demolished making room for a garden, so the facade of the cathedral seems to be decentralized.

Marcos points out that unlike the other European Gothic cathedrals, the height of the aisles here is reduced and most of the light, as well as from the windows “dressed” in thin sheets of alabaster, comes from the high and scenographic lantern.

The plan is a Latin cross with three naves and many chapels in which there are several treasures, including two paintings by Goya, and an apse with a vault frescoed by a blue starry sky, not visible before 2004, the year of restoration that allowed the exceptional discovery, bringing to light, after more than 300 years, the musician Angels frescoed between 1472 and 1478 by Paolo di San Leocadio and Francesco Pagano, two Italian painters whom Cardinal Rodrigo Borgia, future Pope Alexander VI and father of Lucrezia Borgia, had brought València with him.

But the most precious is preserved in the ancient chapter house of the monks which is accessed through a Renaissance portal with a right nave: it is the Holy Grail that legend has it was the chalice used by Christ in the Last Supper with the Apostles.

It is said that this oriental agate cup set in a gold and chalcedony frame decorated with pearls and precious stones arrived from Jerusalem to Rome where, during the persecutions of Valerian, San Lorenzo rescued it by sending it to Huesca, his hometown in Spain. After a thousand vicissitudes and a thousand years, King Alfonso the Magnanimous donated the Holy Chalice to the cathedral of València in 1437 and has since been framed by the marvelous altar, also this work by an Italian artist, Giuliano Poggibonsi, disciple of Lorenzo Ghiberti author of the Gate of Paradise of the Baptistery of Florence.

More recently, popes Wojtyla and Ratzinger celebrated with this chalice, while Pope Francis approved a Jubilee of the Holy Chalice to be celebrated every five years.

The exceptionally deserted chapel of the Holy Chalice allowed us to admire it in all its beauty. On the wall opposite the Santo Grial there are large hanging chains: they are those of the port of Marseille taken by the Aragonese in 1423.

Positioned behind the main chapel is the statue of the “Verge de la Cadira”, the Virgin of the Choir, moved there after the Civil War of 1943. Many pregnant women approach the beautiful life-size sculpture. Marcos tells us why: for a long time, in the city of València, a curious tradition has been handed down whereby expectant women recite a prayer to the Virgin for a lucky birth and make nine laps inside the Cathedral.

València, from the huerta to the sea