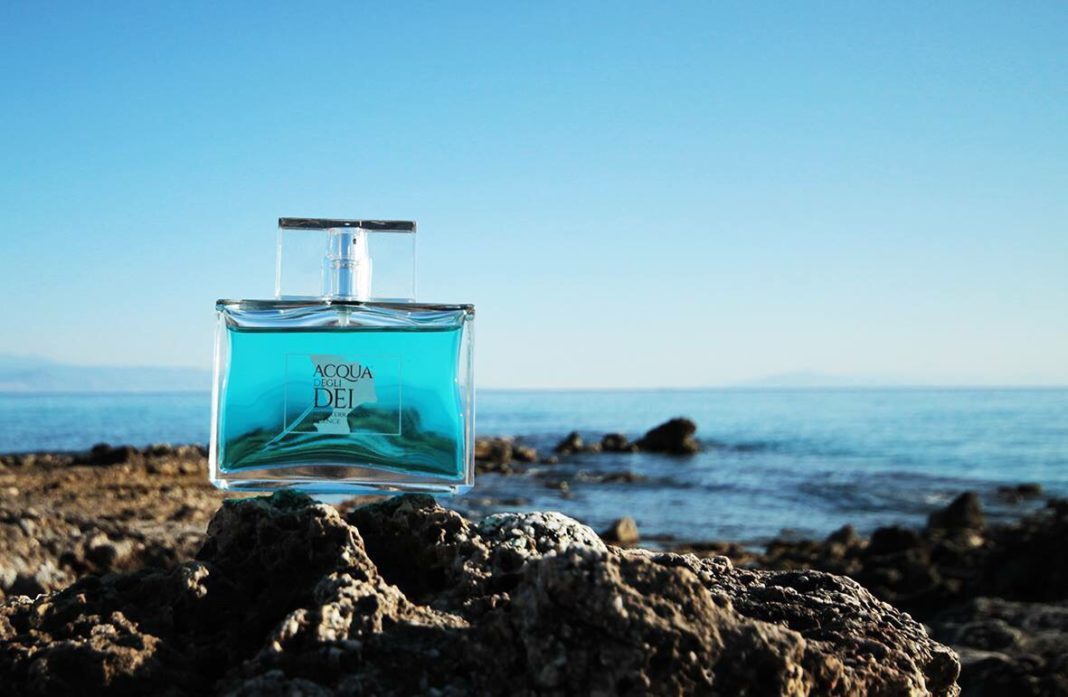 “Acqua degli Dei – Mediterranean Essence”: the link with the Tyrrhenian coast of Calabria called Costa degli Dei emerges strong and clear from its name. A name that is due to the breathtaking beauty of the area but also to the story that is intertwined with the myth of these landings.

It is said that right here, from a rock in the middle of the sea between Calabria and Sicily called Mantineo (from the Greek Manteuo giving responses), the oracle and prophetess Manto provided responses to passing sailors, among whom Ulysses apparently also appeared before face Scylla and Charybdis, the sea monsters of the Strait of Messina. Heroes and gods, therefore, have always frequented this coast. 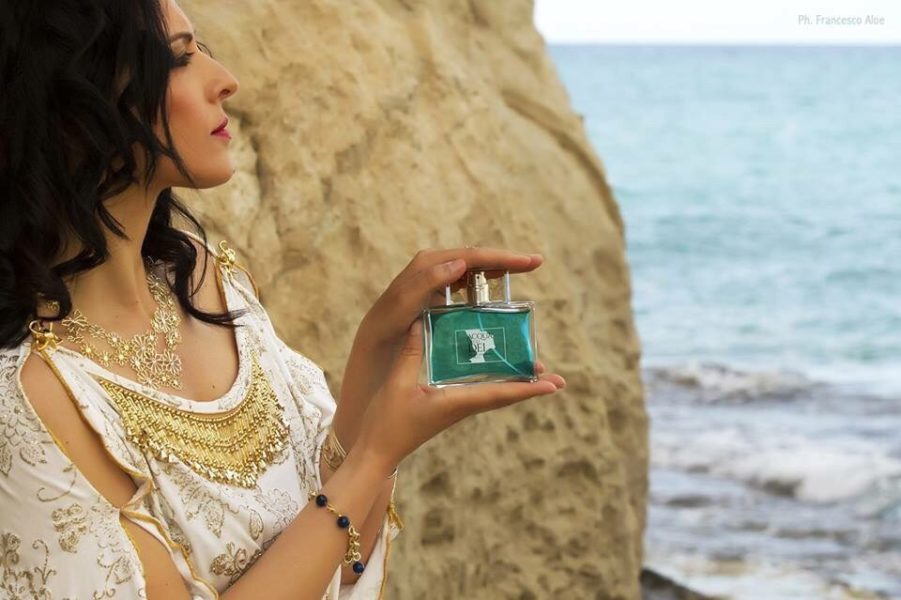 And heroes of our time we can define Fabrizio Giuliano and Fabio Muzzupappa, the young entrepreneurs who wanted to start from their land of belonging, of which they are proudly proud, their experiential olfactory marketing project inspired by the values ​​of Southern Italy and the Mediterranean. And just like Manto provided the route for passing sailors, they, through the scents that are inspired by the colors and essences of their land, want to convey a positive message to all #NavigantiDiOggi, who despite not facing the open sea, every day they have to do with an ocean of pitfalls and uncertainties.

Follow an olfactory trail in order not to lose the route, but also to not lose one’s own history, recover one’s origins and do business in reality that is never too simple like those of our South.

This intrigued us and could not fail to excite us.

So we wanted to learn about the project and tell it on our blog, testing the products firsthand. Remaining also seduced by the myth, but above all inebriated by these essences that bring to mind ancient tales together with the scents from the immortal charm of these lands that owe their greatest wealth, like the whole of the Mediterranean, to the fact that they have always been crossroads of sailors and merchants.

The birthplace of Acqua degli Dei is Tropea, with the first “Concept Store” opened in 2015. Two years later the one in Pizzo Calabro is inaugurated, while in June last year the third “Concept Store” was opened on the Costa degli Aranci, in Soverato. But after three years of activity there is also the big leap in the rest of Italy and abroad, with the opening of over 35 corners at home and sales points in Switzerland and Belgium. 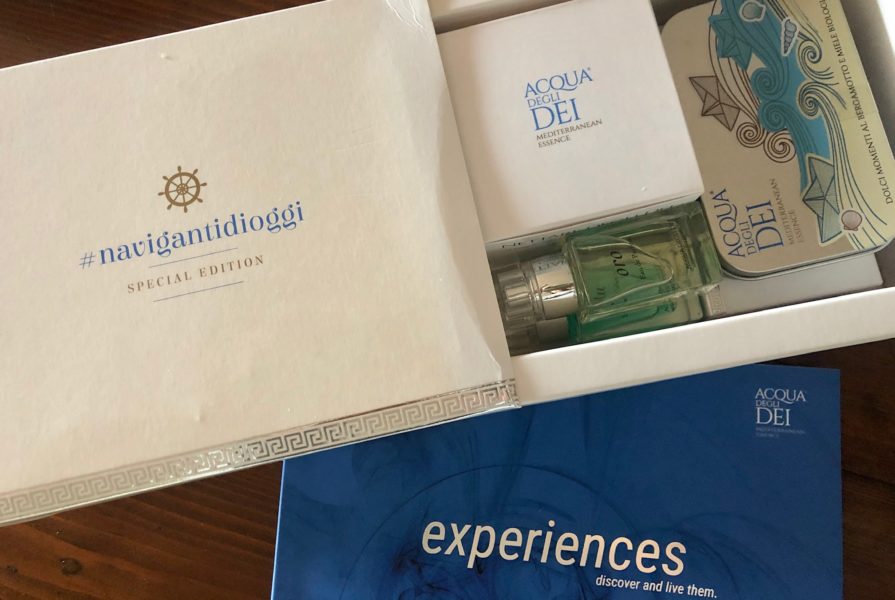 The gift box designed for Christmas arrived at our house with the two mignon bottles of the exclusive Eau de Parfum Blu and Oro, the organic honey and Calabrian bergamot bar of soap, the face and body cream and the tin box, created exclusively for Acqua degli Dei, with bergamot and honey candies along with another “cuddle”, the brochure of experiences, in Italian and English, which offers a selection of exclusive partners combined with the sale of products across the board.

And it is precisely from here that we want to start to better define the “Acqua degli Dei – Mediterranean Essence” project which, as its creators explain, is a new way to promote Southern Italy, incorporating hotel facilities into a wider circle. service partners who have the opportunity to promote themselves through the brochure in which the exclusive services offered free of charge to customers who purchase the “Acqua Degli Dei – Mediterranean Essence” products are sponsored, both in the stores in Calabria and in the corners at the partners themselves, than online through e-commerce.

The novelty of the brand is precisely the synergistic vision of being a team and at the same time proposing and promoting not just services but real experiences that leave a trace in the heart and mind of those who live there.

And from this point of view nothing has been left out. Whoever enters one of the three stores is immediately enveloped, not only by the scents that evoke the sea breeze merged with the typical citrus accords of Calabria and transported in a metaphysical sense on the same rock that inspired the birth of the brand, but also by a atmosphere that refers to the history of the territory through the design of the perimeter Greek enclosing Calabria and Southern Italy, a crossroads of civilization among Arabs, Saracens, Greeks, Normans, completed by the 2 gold and blue stripes, to represent the sun and the sea and the Calabria stylized on the floor. But that’s not enough, because once you walk in the door you get the feeling of boarding a sailboat ready to set sail and to welcome all the #NavigantiDiOggi who also have the opportunity to write a different phrase every day on the blackboard wall.

We, waiting to be able to experience these emotions first-hand and to reach the Costa degli Dei which we do not yet know and which attracts us for its undoubted magnetic charm in which the beauty of a breathtaking nature blends with the charm of legends related to myths of Magna Graecia, we let ourselves be guided by the scented trail of “Blu” and “Oro”, the first two fragrances created with plants and flowers of Calabria that in each note contain the strength of the sea and the sun, the warmth of the people and the passion of the heroes who touched the Costa degli Dei. 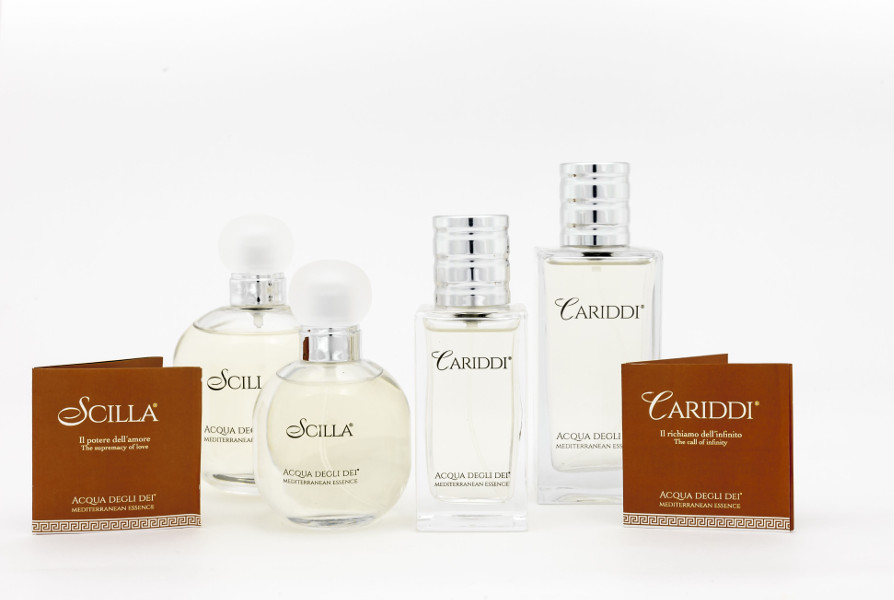 The other two Eau De Parfums, which you can find in the stores and online, are dedicated to Scilla and Cariddi, conceived as real potions that enchant and swallow: the first with a sweet, enveloping fragrance and distinctly feminine characteristics, the other like Blu and Gold, unisex and with pungent, almost impertinent notes, given by pepper, bergamot, mandarin, pine and fir.

In addition to perfumes, ambient perfumers, foam baths and body creams are available, all without parabens, petrolatum, silicones and palm oil, just like we like them. And to complete the line a fine cotton cloth.

At this point our desire to know more closely the creators of “Acqua degli Dei – Mediterranean Essence” has grown, which is not just a perfume, but an innovative tourism promotion project, “an olfactory awakening that crosses the soul and that expresses the richness of the territory and the charm of Mediterranean mysticism”– as Fabrizio and Fabio concisely but convincingly defined it. 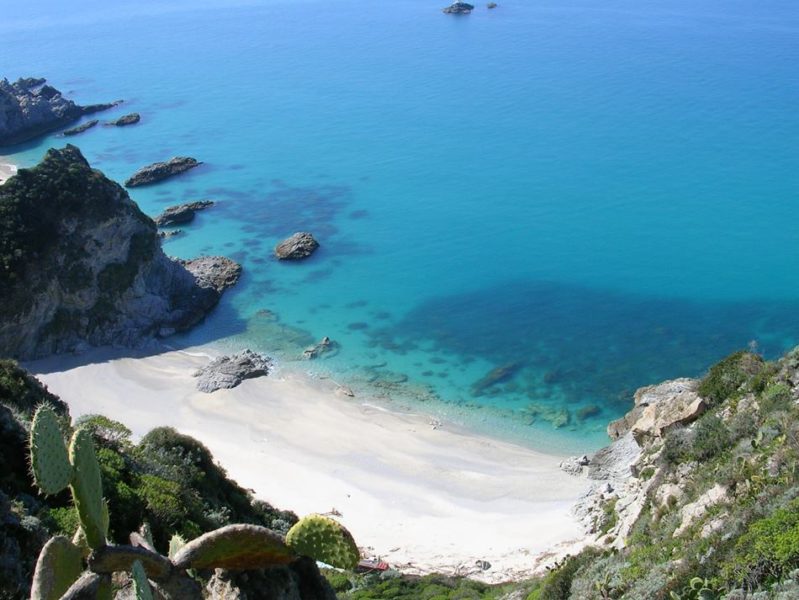 And if it is the sense of smell that leads us to discover the Costa degli Dei, once there, we will activate all the other four senses to fully enjoy excursions on the trail of ancient legends, sunset dinners with views of Stromboli, and experiential wellness trails , dips in the blue sea, between cultural, gastronomic but also mystical tours, taking advantage of the proposals of the partners who strongly believed in this project. We can not wait!

Lorena Benatti, dreaming of the sea between red and blue

Estrellabijouxgaia: the jewels that speak